On Sunday August 11, Bay City police were called to the home of David R. Mayse on Marsac Street. Mayse had been watching television when he heard noises coming from upstairs where the building’s owner, Steven L. Rufershafer, grows marijuana for medical use. Rufershafer is a licensed medical marijuana caregiver; he was standing in the backyard at the home when police arrived on the scene. 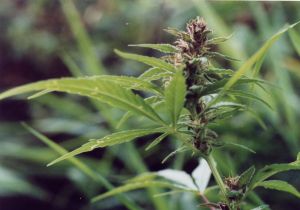 After Mayse called Rufershafer to tell him there was someone in the home, Rufershafer went to the house and walked upstairs to investigate. He was carrying a gun according to a news article at Mlive.com, and concluded that someone was inside one of the rooms when he attempted to push on the door and it pushed back. Rufershafer then threatened the trespassers that he had a gun, and that if they tried anything he would shoot seven holes in the door. He then went outside into the backyard to look at a window that accessed the room, one that had contained an air conditioner but that was now open.

When police arrived on the scene, they found two 17-year-old teens, Dalton P. Harris and Ryan L. McGeshick. The two were taken into custody, along with a bag which contained marijuana according to court records.

The two teens were walking in the area earlier in the day according to a story Harris told police, when they smelled marijuana coming from the residence. The two then decided that come nightfall, they would break in and steal some of the marijuana crop. Harris alleges that McGeshick began cutting stems of the marijuana plants using a pair of shears.

On Monday August 12, Harris and McGeshick were arraigned by Bay County District Magistrate Janice E. Doner. The two were charged with conspiracy to commit first-degree home invasion, first-degree home invasion, delivery or manufacture of marijuana, and larceny in a building. As of August 14, the two teens remained in the Bay County Jail on a $25,000 cash-surety bond each.

While charges of home invasion are extremely serious and may leave the two men facing up to 20 years in prison if convicted, Michigan drug possession lawyers understand the seriousness of drug-related offenses as well. If convicted, these young boys may face up to four years in prison for delivery or manufacture of marijuana.

Anyone who has been arrested or charged with an offense involving marijuana, cocaine, heroin, meth, or any illegal drug or narcotic must speak with an experienced and aggressive Michigan drug crime attorney immediately for the best possible outcome.