On Friday September 6, Taylor police raided a home in the 27000 block of Joan Avenue, coming away with what was called a “large haul” of illicit substances according to a news article at The News-Herald. 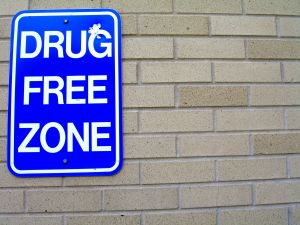 Friday afternoon at approximately 2:30, more than a dozen officers descended on the home. After knocking on the door and receiving no answer, officers entered the home by ramming the front door. Inside was a 22-year-old male and young boy who the man identified as his nephew. The man’s mother and boyfriend also lived at the residence according to the man, however they were not home at the time police arrived.

Upon searching the house, officers discovered codeine, Xanax, Vicodin, Oxycodone, and other illicit narcotics. In all, about 600 prescription pills were located by police. Also found on the property were more than 180 grams of marijuana, a water bong, digital scale, and two large safes.

While police were searching the home, the 44-year-old boyfriend returned and was patted down by officers. While he was not in possession of any weapons, officers did discover a large amount of cash in his pocket.

After stating to police that the safes located in his girlfriend’s bedroom belonged to him, the man agreed to open them. One of the safes contained marijuana residue, while the other held a substantial amount of cash, numerous bottles of prescription pills which were unlabeled, and marijuana in three gallon-size bags.

According to the news article, drug residue was detected on the money by a police dog. Officers arrested the man for distribution of narcotics and confiscated several items at the home including two flat screen televisions, the cash, and the Chrysler van the man was driving when he arrived at the home.

Penalties for possessing or distributing marijuana or narcotic drugs are severe in the state of Michigan. For example, possessing Vicodin, classified as a Schedule 3 drug, could result in a $2,000 fine and up to two years in jail if convicted. Possession of Oxycodone may leave the accused facing several years to life in prison along with fines of up to $1 million dollars depending on the amount involved. If charged with manufacturing or distribution, defendants face even tougher penalties.

If you have been accused of a crime involving any amount or type of illegal narcotic or substance, contact a highly regarded Michigan drug crimes attorney immediately. It is urgent you take quick action to protect your legal rights, freedom, and future.