Recently, 26-year-old Chad Neiderquill was charged with robbing a Saginaw woman which he knew with a screwdriver. Neiderquill allegedly stole the woman’s prescription medication on September 4 as she was carrying in and putting away groceries. 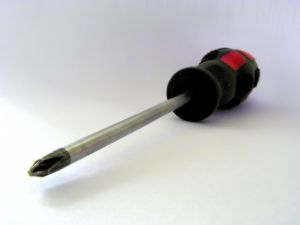 The victim, 60-year-old Lillian George, told police that Neiderquill was driving in the area as she was putting away groceries, and that he stopped and offered to help her. George said that once all of the groceries were inside, the defendant demanded that she give him her prescription medication, including oxycodone. Saginaw Police Detective Sgt. Reggie Williams said the woman claimed that when she refused, Neiderquill pulled a screwdriver out of a pocket to threaten her, holding it above her head and threatening that if she called police, he would claim George sold him the medications.

On Tuesday November 26, Neiderquill pleaded guilty to armed robbery before Saginaw County Circuit Judge James T. Borchard. He was initially charged with carrying a dangerous weapon with unlawful intent and extortion as well, however prosecutors dropped these charges in exchange for his guilty plea. A news article at Mlive.com indicates that prosecutors will recommend the judge sentence Neiderquill to three years and six months in prison, a minimum sentence for armed robbery according to the defendant’s state sentencing guidelines.

Neiderquill remains in jail on a $75,000 bond, and is scheduled to be sentenced by Borchard on January 9.

In this situation, pleading guilty to armed robbery possibly prevented the defendant from spending up to life in prison. In Michigan, anyone who uses fear, force, or violence in an attempt to steal money or possessions from a person and who does so while possessing or even insinuating the presence of a dangerous weapon may be sentenced to life behind bars according to the Michigan Penal Code 750.529.

Armed robbery is a very serious crime, one that leaves the defendant facing extremely harsh penalties if convicted. If you have been arrested or even charged with a larceny offense, it does not necessarily mean you will be convicted. The outcome often depends largely on the skill and ability of the Michigan criminal defense attorney you choose. Never face charges of a serious or violent crime alone; without a capable defense lawyer, your freedom, reputation, career, and future are at risk.