On Wednesday October 30, a search warrant was executed at a home in the 39000 block of Paw Paw Road in Paw Paw Township by Van Buren County Sheriff’s Office narcotics detectives. Now, a 33-year-old woman has been arrested and jailed for harboring a fugitive and manufacturing meth, according to a news article at Mlive.com. 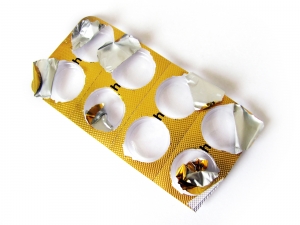 Police claim that upon entering the residence, they found the woman in a locked upstairs bedroom. Police forced entry into the room after the woman refused to open the door or obey their commands. Deputies arrested her after she refused to comply with their commands even after gaining access to the bedroom.

Upon further search of the home, detectives located a small trap door in the back wall of a closet; upon further inspection, it was found that the trap door led to an attic. This is where police found Kalamazoo fugitive Gary Harding, who refused to come out until detectives threatened to send in a K-9; Harding then came out and was arrested.

Police continued searching the residence and discovered components used to manufacture methamphetamine, along with an active one-pot meth lab.

If convicted, both the woman and Harding likely face serious penalties including prison time and fines. In Michigan, those accused of operating or maintaining a meth lab may face up to life in prison if convicted, depending on the amount of drug involved. Manufacturing methamphetamine will leave the defendant facing potential fines of up to $25,000 and up to 20 years in prison.

These charges are extremely serious; the consequences of a conviction will be life-changing. If you have been arrested for manufacturing or possession of meth, marijuana, cocaine, or other illegal narcotic drugs, consult with a highly effective and experienced Michigan drug crime defense attorney immediately.