In April, we wrote about Jeffrey P. McKenna being charged with arson in connection with a fire that burned a rental home where he was living. The home was divided into separate units; four families were living in the rental home at the time. Now, 33-year-old McKenna is facing two additional charges of assault with intent to murder in connection with two people who lived in the upstairs section of the home. 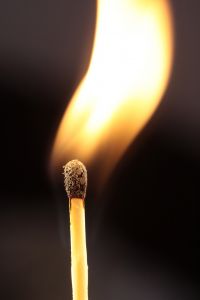 Prosecutors added the charges on Thursday July 18 following testimony from multiple witnesses. Judge A.T. Frank of the Saginaw County District Court concluded that probable cause was shown by prosecutors at the preliminary hearing to take the defendant to trial in Circuit Court. In Michigan, assault with intent to murder carries a maximum penalty of life in prison.

Although McKenna was initially scheduled for a preliminary hearing regarding the arson charge in May, it was postponed when Eldor Herrmann, McKenna’s defense attorney, challenged whether his client was mentally competent to stand trial and requested a psychiatric exam. Judge Frank ruled that the defendant was competent to stand trial after receiving a report from the Center for Forensic Psychiatry in Ypsilanti.

McKenna allegedly set fire to the rental home in January as tenants were sleeping inside. One of the residents awoke and smelled smoke; all four escaped without injury according to news reports. Firefighters battled the blaze in extremely cold temperatures and high winds, one sustaining minor injuries.

Michigan criminal defense attorneys realize the serious criminal penalties individuals face if convicted of arson of a dwelling, a 20-year felony. However, if convicted of the additional charges McKenna may spend the remainder of his life behind bars.

Individuals who are accused of serious or violent crimes are facing severe and life-changing consequences without the support and legal skill of an experienced Michigan criminal defense lawyer. Protect your freedom, reputation, and future by consulting with an aggressive attorney immediately.