Last month, four individuals were arrested in connection with operating a mobile meth lab after Michigan State Police troopers with the Munising detachment stopped a vehicle for a traffic violation. Troopers pulled over a 2003 Ford Taurus, and upon investigating discovered an active one pot meth lab according to news reports at The Daily News. Other meth-making components were also found in the vehicle. 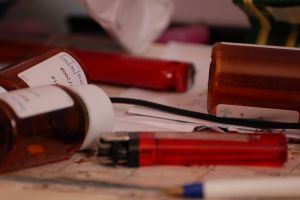 Four people were arrested in connection with the mobile meth lab, including Trevor Maxon, 17, Cortne Cornish, 19, Jordan Maddox, 20, and Trent Howard, 21. All four were each charged with one count of felony manufacture of methamphetamine.

UPSET (Upper Peninsula Substance Enforcement Team) detectives responded to the scene to collect the meth-making components and properly dispose of them at a secured holding facility.

Nearly two weeks after the arrests were made, one of the defendants entered a not guilty plea in in Alger County. Trent Howard pleaded not guilty on January 22. The other three defendants waived their arraignments in circuit court, and waived their rights to a preliminary exam.

Trent Howard is scheduled to appear in court on February 19.

All of the defendants in this case may face a maximum of 20 years in prison and fines of up to $25,000 if convicted. In Michigan, criminal penalties may be enhanced based on factors including criminal history, whether a drug crime occurred within close proximity of a park, church, school, or home, etc. The penalties for a conviction on drug charges in the state are extremely harsh as law enforcement and lawmakers continue the war on drugs. In fact, certain drug offenses will leave a defendant facing up to life in prison if found guilty.

The defendants in this case are very young; unfortunately, depending on the outcome they may find themselves behind bars until well into their 30’s and 40’s without the legal guidance and support of an aggressive Michigan drug crime defense attorney. Choosing a capable and highly experienced lawyer can make all of the difference in whether someone charged with a drug offense faces life-changing consequences, or retains their freedom.