On August 7, two young men from Detroit were arrested after it was suspected they were involved in ramming their truck into a gun shop in Southfield, then stealing guns and various ammunition. The two suspects, 17-year-old Tobais A. Nance, and 20-year-old Arthuro L. Tate are now in custody for allegedly robbing Action Impact firearms and gun range. 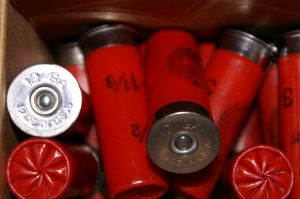 Both suspects are now charged with firearm larceny, malicious destruction of a building over $20,000, breaking and entering into a building, use of a firearm in the commission of a felony, and unlawfully driving away a motor vehicle according to a news article at Mlive.com. The incident took place on June 5; it is believed the suspects stole a cargo truck, which they used to crash into the gun shop and range located at 25992 8 Mile to gain entrance into the shop. The two men allegedly stole various ammunition and 20 handguns.

The owner of the gun shop estimated the damage to his property to be more than $200,000.

Following their August 9 arraignment, bond for the suspects’ release was set at $100,000. A preliminary hearing is scheduled for August 19.

Southfield Police Chief Eric Hawkins said that the participation of the Detroit Police Department, state police and ATF (Bureau of Alcohol, Tobacco, Firearms, and Explosives) was a great example of how communities can be made safer through collaboration.

Michigan criminal defense lawyers know there are numerous laws surrounding charges of breaking and entering, which mean penalties vary widely from case to case. According to Section 750.110 of the Michigan Penal Code, a person who breaks and enters a building with the intention of stealing may face up to 10 years in prison. Combined with the other charges, it is likely these two young men face extremely serious consequences if convicted.

If you have been accused of or arrested for any type of theft or property crime, consult with a talented Michigan criminal defense attorney immediately to protect your legal rights and freedom.