On Sunday September 29, the McDonald’s located at 3325 Washtenaw Ave. in Ann Arbor was reportedly robbed by two men, one who displayed a gun before demanding an employee to take money out of a safe. Police responded to a report of an armed robbery at the McDonald’s location at approximately 4 a.m. on Sunday, and reported that details of the incident were scarce. 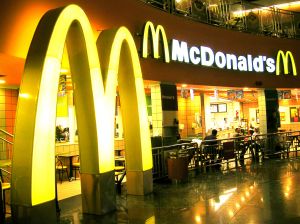 According to Ann Arbor police Lt. Renee Bush, two men entered the McDonald’s and displayed a gun, then jumped the counter before forcing an employee to remove money from the safe. Bush also said in a news article at Mlive.com that a witness said one of the men pointed a gun at her.

After stealing the money, the two men fled on foot. The amount of money stolen from the McDonald’s has not been released by police. As of the afternoon of October 1, the suspects had not been apprehended; authorities are asking for the public’s help in capturing the suspects, both described as black men wearing dark hooded sweatshirts, masks, and light colored jeans. One of the suspects is said to be approximately 6 feet 4 inches tall; the other is described as between 5 feet 8 inches and 6 feet tall.

According to Michigan Penal Code 750.529, any individual found guilty of using violence, fear, or force in the course of stealing property or money from an establishment and while in possession of a dangerous weapon may face life in prison if convicted. Robbing an establishment without actual possession or insinuation of a weapon will result in up to 15 years imprisonment. Other than losing their freedom, individuals convicted of a serious crime may also face fines and a criminal record which will negatively impact various areas of their lives including employment opportunities.

If you have been arrested for armed robbery or any offense involving larceny or theft, contact an experienced Michigan criminal defense attorney at once so that your legal rights and freedom may be protected.