In the early morning hours of September 15, 17-year-old Ricardo Carbajal-Sosa and 18-year-old Jeffrey Rivera allegedly broke into a home on McKee Avenue SW. Both teens waived their probable cause hearings in Wyoming District Court. Both of the defendants are charged with two counts of home invasion and felony use of a firearm; because they waived probable cause hearings, the cases will not move forward to felony court where they will be tried on the charges. 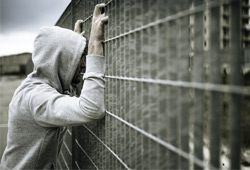 Police claim the two teens entered the home forcibly and had begun stealing the homeowner’s property when it dawned on them that 911 had been called; they then fled the scene. Wyoming police also said in a news article at Mlive.com that a shot was fired during the commission of the crime, however no one was injured.

After arriving on the scene and searching for the two teens, police located them on Clyde Park Avenue SW hiding near a trash dumpster where they also found weapons and some of the stolen goods nearby.

The teens remained in the Kent County Jail on $100,000 bonds after waiving their probable cause hearing. If convicted, each may be sentenced to up to 22 years in prison.

Michigan breaking and entering attorneys understand the seriousness of committing a crime such as home invasion, and the severe punishment those convicted face. In this situation, if the defendants are convicted and serve the maximum sentence, they will be middle-age before released from prison.

The most important decision someone accused of a serious or violent crime can make is in choosing a capable and aggressive Michigan criminal defense lawyer who is thoroughly experienced in these types of cases. A seasoned attorney can make all the difference in the outcome, frequently having charges dismissed or reduced or securing an acquittal. Without an experienced defense lawyer, individuals will likely face substantial prison time, fines, and other life-changing consequences.