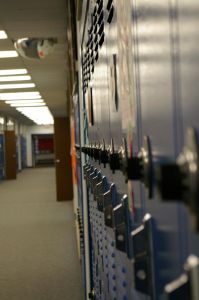 Police caught the two as they were attempting to crawl out a window, according to a news article at Mlive.com. At about 1:15 a.m. on July 20, police noticed a bicycle leaning against the school building; upon further inspection, they discovered a door to the school had been forced open. Using a tracking dog, police continued to search the school and discovered the two suspects climbing out a window.

During the escapade, the two suspects had thrown papers and books, smashed computers, broken windows, and damaged furniture. In all, the two are said to have caused more than $9,000 damage to the property.

Breaking and entering is a serious criminal offense; the penalties an individual will face if convicted depend largely on what police and prosecutors assume the defendant’s intentions were, or whether the individual committed larceny or a felony offense. When someone forcibly enters a building with the intent to steal property or money, that individual may face up to 10 years in prison if convicted.

You do not have to completely enter a building to be charged with this crime; after breaking (such as forcing a door open, breaking a window), the act of putting an arm through the window qualifies as entering.

In Michigan, breaking and entering is a common criminal offense. Whether an individual breaks and enters in order to commit larceny, or does so out of no real motivation other than mischief, the consequences are serious. If you have been accused of this crime, take action immediately. Contact a qualified Michigan criminal defense attorney who will work to protect your freedom and provide you with exceptional legal counsel.