On Saturday October 26, Van Buren County sheriff’s deputies were in pursuit of two men, 24-year-old Jason Smith, and 26-year-old Matthew Durian, on outstanding warrants. Upon apprehending the men, it was discovered Smith’s cell phone was monitoring deputies’ conversations through an app which operated as a police scanner, according to a news article at Mlive.com. 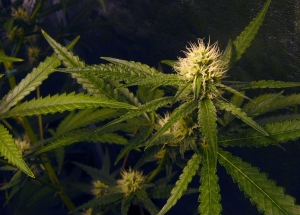 A news release issued by the Sheriff’s Department indicated that deputies were in pursuit of the two fugitives in the area of Sixth Avenue in Bloomingdale Township when they witnessed the two men run into a field after exiting the back door of the residence. They soon apprehended the pair, both residents of Gobles.

Upon arresting the two men on the outstanding warrants, deputies heard their own radio traffic coming from Smith’s cell phone. The news release also indicated that during the arrest, Durian began pushing and kicking the deputies, although no one was injured. The sheriff’s office also revealed that upon capturing the two, deputies discovered methamphetamine and marijuana.

Durian was placed in jail for new charges of marijuana possession and resisting arrest, along with the warrant for failure to appear in court on a weapons charge. While new charges related to the scanner app on Smith’s phone will be sought by the sheriff’s office, Smith was jailed on one charge of methamphetamine possession, and on bench warrants which were issued due to his failure to appear in court on traffic violations.

Marijuana possession is a misdemeanor offense in Michigan, however individuals who are convicted may face penalties which include fines of up to $2,000 and up to one year in jail. News reports do not indicate the amount of methamphetamine Smith had in his possession; penalties for this offense depend on the amount of meth involved, and may include fines of as much as $15,000 and/or up to 10 years in prison.

Drug crimes should be taken seriously, as the punishment in Michigan for drug offenders is extremely harsh. Whether you have been charged with cocaine possession, manufacturing methamphetamine, or maintaining a marijuana grow house, consult with a highly experienced Michigan drug crime defense attorney right away.