On Monday, January 27 a Traverse City man was charged with involuntary manslaughter for the death of his girlfriend on November 19 of last year. 33-year-old Robert Caldwell claims that he was attempting suicide when he fatally shot 28-year-old Monica Anderson. 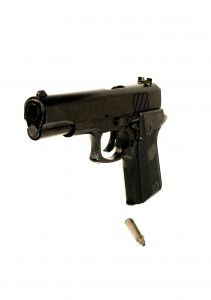 According to news reports at Mlive.com, Caldwell and Anderson shared a Traverse City apartment. Caldwell told police that he was attempting to shoot himself as he stood on a stairwell in the building, and that as he shot the gun he flinched which caused the bullet to travel in the direction of where Anderson was. After performing an in-depth investigation into the incident, law enforcement officials believe the shooting of Anderson was an accident according to Prosecutor Bob Cooney, who said the defendant had been cooperative since he was arrested. Caldwell dialed 911 on the evening of November 19 to report his suicide attempt and the fact that the bullet accidentally struck his girlfriend.

Caldwell is also charged with felony firearm, resisting and obstructing police, and discharge of a firearm while under the influence. He is scheduled to be arraigned January 28.

In the state of Michigan all homicide charges should be taken seriously; harsh penalties await those who are convicted. While first-degree murder is the most serious homicide charge, involuntary manslaughter occurs when another person is killed without intent. Even though the death may have been an unintended accident, the criminal penalties are severe and according to Michigan Penal Code 750.321 include a fine of up to $7,500, up to 15 years in prison, or both.

Should Caldwell plead guilty or accept a plea deal from prosecutors, it is likely he would face reduced penalties. Defendants often face less severe punishment when pleading no contest or guilty to the charges leveled against them, although it is not recommended in every case. Whether you should maintain your innocence or plead is a subject which should be discussed with a highly experienced Michigan criminal defense attorney. If you or someone you know has been arrested for involuntary manslaughter or is under investigation, contact a lawyer immediately.