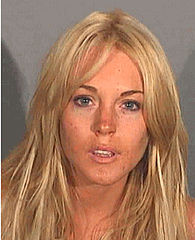 While some celebrities use their fame and fortune to make the world a better place, others can’t seem to figure out how to behave in a positive way. Celebrity arrests happen over and over – in a lot of cases, it’s the same famous person getting arrested repeatedly. Some celebrities have made a second career out of run-ins with the law and are now more [in]famous for their arrest records than for their acting careers.

Let’s call Ms. Lohan the queen of celebrity arrests. E! Online has made a nice timeline of her arrests, which started in 2007. The most recent was in March of 2013. I think the thing that makes Lohan’s many arrests so controversial is that she doesn’t seem to get the message. Despite being sent to rehab, placed on probation, and spending time in jail, she kept drinking and drugging. Word is that she’s completely sober now – and I can only hope it lasts.

OJ Simpson is another celebrity who just keeps getting arrested. The guy was found not guilty of murder in 1995 and hasn’t seemed to be able to avoid trouble with the law ever since. In 2007, a few months after publishing the brazen If I Did It, which hypothetically detailed how OJ might have committed the murders of Ronald Goldman and Nicole Brown Simpson, he was arrested for armed robbery. Four of the men arrested with him took plea bargains and ended up with probation. As for OJ, he got 33 years in jail.

When you know the police are on their way, you have a few options. You can be resigned to the fact that you’ve been caught in the act. You can try to deny it. Or you can be like former child star Amanda Bynes and toss the evidence out the window of your 36th floor apartment. Her unusual reaction led to her being charged with tampering with evidence and criminal possession of marijuana. She was also charged with reckless endangerment, because who knows what can happen when you chuck a bong out of a high-rise window.

Batman’s a superhero. Christian Bale, the most recent man to play him, isn’t so much. In 2008, the Batman actor was arrested for alleging assaulting his mother and older sister, the day before attending the European premiere of The Dark Knight. Although Bale ended up not being charged with anything after the police questioned him, his arrest cast a pall over the premiere of the film.

Heather Locklear is yet another celebrity who gets more attention these days for her arrests than for her work. The former star of Melrose Place and the sitcom Spin City was arrested in 2008 for driving under the influence. Her more controversial arrest happened in 2010, when she was technically arrested for an early morning hit-and-run. Luckily, all her car hit was a no-parking sign and no one was hurt. Police were able to trace the debris at the scene back to her BMW. Her attorney was quick to point out that there wasn’t any proof that Heather was actually behind the wheel. A month later, she was cleared of any charges, since police couldn’t find concrete evidence that she was in the car.

Richard Gere was “arrested” for the crime of the century back in 2007. I’m kidding, of course. Gere finds himself on the list of the most controversial celebrity arrests because of the tame nature of the reason for the warrant against him. During a charity event in India the actor kissed Shilpa Shetty, a Bollywood star and a past winner of the UK’s Celebrity Big Brother on the cheek. Some people took offense and deemed his actions obscene, leading to an arrest warrant. Gere was never officially arrested, though and the whole thing blew over a year later.

Like Lohan, Charlie Sheen has been arrested so many times over the course of his career, it’s difficult to keep them all straight. Let’s go with his arrest on Christmas Day back in 2009 as his most controversial. Instead of having a nice family holiday, Sheen was ended up in jail after threatening his then-wife, Brooke Mueller, with a knife. He ended up being charged with third-degree assault, felony menacing, and criminal mischief.

In 2006, actor and director Mel Gibson was arrested for drunk driving. What made his arrest so controversial was the way he handled it. Gibson made anti-semitic remarks to the officer, James Mee. The saga of Gibson’s arrest stretches beyond the actor himself. Mee accused the LAPD of retaliating against him. In 2012, Mee was ultimately fired by the department, for an unrelated matter.

Back in 1995, Hugh Grant was at the beginning of a successful acting career. He was also dating a beautiful actress, Elizabeth Hurley. Few people understand what would possess the actor to pick up a prostitute in LA in the wee hours of the morning, just before the release of his movie 9 Months. Although his arrest caused a stir and could have destroyed his career and his relationship, Grant handled it well, publicly apologizing on late night talk shows and seeming sincere in his apologies.