In June of 2012, Albert Lewis Woods Jr., who is now 25 years old, was convicted of robbing a Comstock Park McDonald’s. Woods was sentenced to 25 to 50 years in prison for the crime in which he and Cedric Welch escaped with cash and gift certificates after pulling guns on employees at the restaurant in September of 2011. Now, Woods may have three years shaved off of his sentence after he appealed his conviction and sentence to the Michigan Court of Appeals. 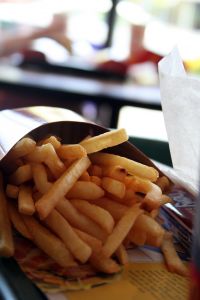 Woods appealed the conviction and sentence on several grounds, including the fact that an arrest warrant was not secured by sheriff’s deputies prior to his arrest, that evidence should have been excluded which was secured after a GPS tracking device was placed on his vehicle without a warrant, and that his Sixth Amendment right to confront a witness against him was violated by the circuit court.

While the defendant appealed on numerous grounds, the appeals court ultimately sent the case back to Judge James Robert Redford for re-sentencing due to a technical error made in scoring “offense variables.” Woods’ conviction was upheld. Now, he may spend a minimum of 22 years in prison as opposed to a minimum of 25 years in the original sentence.

On January 27, Judge Woods determined that Woods could receive the same sentence he received in 2012, however he shaved three years off after hearing Woods’ impassioned plea regarding how he is making an effort to turn his life around. Woods also apologized for his past behavior, and emphasized his renewed faith to the judge. In his plea to the judge, Woods said “Please sentence not the boy from the past, but the man in front of you right now.”

Certainly three years is not significant for an individual facing 25 to 50 years behind bars, however it is a slight victory.

Defendants who feel they were wrongly convicted or sentenced in a way that is extremely harsh in comparison to the crime and who wish to appeal must consult with a highly experienced and knowledgeable Michigan criminal appeals lawyer. Winning on appeal is rare, however to have the best chance at securing the desired outcome you must have an attorney who is skilled in the appeals process, one with proven results in having convictions overturned. If you have been convicted of a crime, all hope is not lost. Discuss your situation with a qualified criminal appeals attorney.