James W. Brackenbury, a 42-year-old man charged with robbing an Ann Arbor bank on July 24, has recently admitted to three other bank robberies in the Saginaw and Bay City areas, according to news reports at AnnArbor.com and Mlive.com. 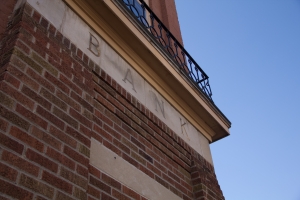 An FBI agent alleges in a criminal complaint that Brackenbury admitted to robbing three banks, and perpetrating a holdup at another, although he obtained no money in that incident. The banks Brackenbury allegedly robbed over a one-month time period include First Merit Bank in Hampton Township, Sunrise Family Credit Union in Bangor Township, and Fifth Third Bank in Ann Arbor. Community State Bank in Birch Run was the intended target of the attempted holdup in which Brackenbury claims he obtained no money.

FBI Special Agent Robert G. Schmitz wrote in an affidavit that Brackenbury obtained $9,600 in the robbery of Fifth Third Bank in Ann Arbor. According to the affidavit, the suspect pointed a black semiautomatic weapon at two bank employees, demanding they give him all of the large bills. Once they complied, he told them it was not enough. After taking the money tellers placed on the counter, Brackenbury took the money and walked out of the bank.

In all of the robberies, witnesses claim that the suspect brandished a handgun at bank tellers; surveillance footage also supports these claims. Brackenbury was arrested on Saturday, July 27, after a tip led Ann Arbor police to a Lansing-area Courtyard by Marriott. At the time of his arrest, the affidavit alleges the suspect had a crack pipe and crack cocaine in his possession. He also told investigators that he acted alone in the robberies, and used a BB gun in the commission of the crimes.

Michigan armed robbery attorneys realize the serious criminal penalties individuals face when convicted of bank robbery, particularly at the federal level. In Michigan, robbing a bank is an offense that will leave the accused facing a potential life sentence.

It is important that anyone accused of or arrested for armed robbery, unarmed robbery, burglary, or any theft-related offense consult with a highly qualified Michigan criminal defense lawyer immediately for legal guidance and support.