On April 6 of this year, the KFC located at 4040 Plainfield Ave. NE in Plainfield Township was robbed by a masked gunman who was recognized by two employees despite the ski mask he was wearing. Now, 45-year-old Ronnie Taylor has been convicted on several charges after robbing the KFC store of $2,000. 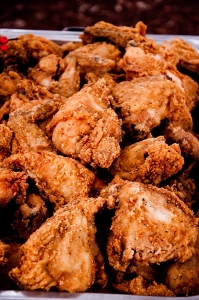 Taylor was convicted on November 27 of armed robbery, conspiracy to commit armed robbery, being a felon in possession of a weapon, felony firearms, and being a habitual offender according to news reports at Mlive.com.

Two employees at the restaurant said they recognized Taylor, a customer they had seen in the store on numerous occasions. An assistant manager at the location, Kathryn Kasper, claimed that Taylor demanded money, telling her he would shoot her while pointing a gun at her leg.

Taylor allegedly entered the KFC through a door at approximately 11 p.m. after an employee exited and did not lock the door behind him. While wearing a ski mask, he went to the back area and demanded money from the safe while pointing a handgun at employees. A cashier at the store said the $2,000 Taylor made off with was all that was in the safe.

Valery Reusser, a cashier at the store, said that several victims noticed the voice and eyes of the robber were familiar; they determined that Taylor was a former employee’s boyfriend, and said that he used to come into the store as his girlfriend’s shift was ending.

Taylor is thought to have had an accomplice in the robbery, 29-year-old Leonardo Simmons. Simmons role has not been revealed; he is awaiting trial. Taylor is scheduled to be sentenced on December 17.

Armed robbery is a very serious criminal offense, one that is punished harshly in the state of Michigan. In fact, those convicted may face up to life in prison when it is proven a dangerous weapon was used in the commission of the crime, or any article to insinuate the presence of a weapon, regardless of whether one actually existed.

To protect your legal rights and have the best chance of avoiding a conviction and associated criminal penalties, consult with an experienced Michigan criminal defense attorney right away.