In the early morning hours of November 12, Kalamazoo Township Police were investigating an explosion that occurred inside a Parchment home that blew out a window and knocked a foundation wall loose. Authorities believe the explosion may have been meth-related. 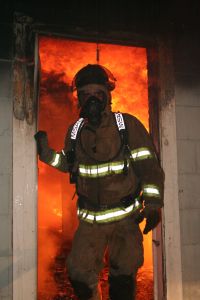 Police are looking for 24-year-old Branden Michael McNamara in connection with the explosion. McNamara is accused of absconding while on parole, and wanted by the Michigan Department of Corrections. Police issued a news release describing McNamara as white, approximately 5′ 10″ tall with blue eyes and brown hair, weighing about 170 pounds. Officials also said that McNamara may have hand and facial injuries.

Police do not believe the owner of the home is involved in any suspicious activity. The explosion at the home located in the 600 block of Parchmount occurred just before 7 a.m.; police would not reveal how many individuals were inside the home when the explosion took place.

Details have yet to be released as to why police suspect meth was being manufactured in the home. The only evidence of the explosion outside the home was broken glass from the window.

If charged with manufacturing methamphetamine, McNamara will face serious penalties if convicted. In Michigan, the punishment for manufacturing Schedule 1 or 2 drugs are severe, and depend on various factors including the type and amount of drug involved, criminal history of the accused, and more.

An individual who is charged with manufacturing methamphetamine in an amount of less than 50 grams will potentially face fines of up to $25,000 and/or as long as 20 years in prison if found guilty. Penalties increase substantially in terms of fines/prison time for larger amounts of an illicit substance including cocaine, ecstasy, opium, or LSD. For instance, amounts of more than 1,000 grams will leave the accused individual potentially facing life in prison and fines of up to $1 million dollars.

Obtaining the legal support and guidance of a talented Michigan drug crime defense attorney is critical to a good outcome. If you or someone you know has been arrested or charged with manufacturing or distributing illegal narcotic drugs, consult with an aggressive defense lawyer immediately.