A 45-year-old Flint man whose name has not yet been released pending his arraignment hearing has been arrested on federal drug and gun charges in connection with a shootout at his south-side Flint home, according to news reports at Mlive.com. The suspect, who is a convicted sex offender, is accused of being a felon in possession of a firearm and intending to distribute heroin. 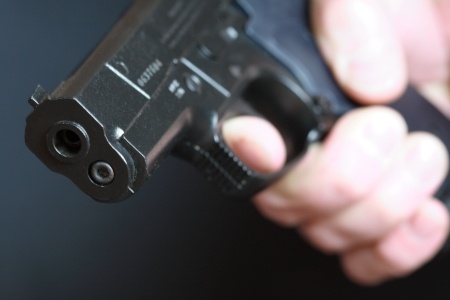 On January 15, Flint police were dispatched to the suspect’s home after receiving a report of shots fired. In the meantime, the man was under investigation by the ATF (Bureau of Alcohol, Tobacco, Firearms and Explosives) which had obtained a federal warrant to search his home. Police were called to the scene before the home could be searched by federal agents.

Upon arriving at the scene, police were told by the suspect that a woman had phoned him requesting to borrow money. When she arrived at his house, three men entered when he opened the door. He maintained that himself and the three men fired guns inside and around the residence, which authorities supported upon investigating due to evidence of more than one caliber of firearm.

An affidavit filed by an ATF agent stated that the home was searched by federal agents after being processed by Flint police evidence technicians. The search of the home allegedly revealed a .45 caliber handgun which had been reported stolen out of Burton, and approximately 68 grams of heroin that was separately packaged into various amounts.

The suspect had been convicted on two counts of first-degree criminal sexual conduct in 1990, and is a registered sex offender who is required to register for life. He is scheduled for a detention hearing on January 22 and remained in custody.

Charges of possession of heroin with intent to deliver are extremely serious in Michigan. Heroin is a Schedule 1 drug, which means it is one of the most dangerous and addictive of all narcotic drugs and substances. Individuals who are convicted of possession with intent to deliver will face severe criminal penalties which include 20 years to life in prison and astronomical fines of between $25,000 and $1 million dollars. The specific criminal penalties an individual may face depend on a number of factors including the type/amount of drug involved.

If you have been accused of marijuana possession, meth manufacturing, cocaine or heroin distribution or any drug offense, consult with a highly experienced Michigan drug crime defense attorney immediately. Your freedom, reputation, and future are at risk; the sooner you take action, the better the outcome is likely to be.