Recently, 36-year-old Terrill Ian Hardaway was charged with second-degree murder in the fatal shooting of Detroit DJ Tony Jackson. Jackson was a disc jockey at Four Winds, a bar located in the 19300 block of Schoolcraft. Hardaway is a Detroit firefighter. 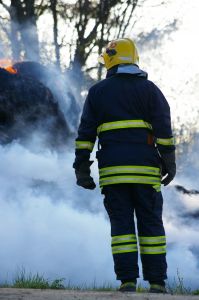 News reports at Mlive.com state that on December 29, Hardaway went into the bar at approximately 12:30 a.m. An argument with 41-year-old Jackson ensued, although the motive is not known. A statement by Wayne County Prosecutor’s Office officials said that security personnel at the bar interrupted an altercation that had become verbal and physical. The two men were taken outside the bar after being separated. Prosecutors allege that once the two men were outside, Hardaway continued to be the aggressor; both men ultimately took out handguns and fired at each other.

Hardaway was struck in the shoulder; both men were taken to the hospital where the victim was pronounced dead at the scene. Hardaway’s injuries were treated and he was released.

Hardaway was charged with felonious use of a firearm in addition to second-degree murder, which carries a maximum sentence of life for those convicted. A preliminary exam is scheduled for February 25. A $500,000, 10 percent bond was set on Tuesday for Hardaway however he appealed the bond which was reduced to $150,000, 10 percent by 36th District Court Judge Ronald Giles.

While second-degree murder is a criminal offense considered less serious than first-degree murder, it is still a very serious crime which could leave the defendant facing up to life in prison.

All types of murder not considered first-degree murder are defined as second-degree murder according to Michigan Penal Code 750.317. While the maximum penalty is the same for both (life in prison), those accused of second-degree murder ultimately leave their future in the hands of the jury if convicted. The jury may decide on a prison term of any number of years to life.

It is vital to consult with a top-rated Michigan criminal defense lawyer immediately when accused of any homicide offense. Your attorney will work vigorously to protect your legal rights and freedom, thoroughly investigating your case and working with you to determine the most effective approach for securing a good outcome. Without a seasoned defense attorney, your freedom, career, reputation, and future are at risk.