In October we wrote about Michael Hamilton, a Dearborn man who was charged with open murder in the shooting death of 49-year-old Robert Marcyan. Hamilton was convicted in October, and recently sentenced to life in prison without the possibility of parole. Jackson County Circuit Judge John McBain told Hamilton upon sentencing, “You are going to die in the Department of Corrections.” 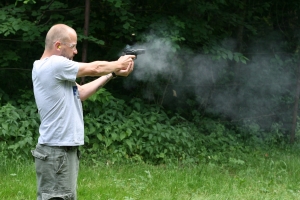 Hamilton was charged with open murder, assault with intent to murder, and other charges. Marcyan was a twin; he and his brother Richard were at Hamilton’s father’s cottage after having been requested to provide an estimate to perform some work on the property. Hamilton’s father was supposed to meet the brothers, but was injured and could not make the appointment. Instead, the defendant met with the brothers. He had reportedly met the two men on one occasion, approximately a month earlier.

No clear motive was given for the murder, however George Lyons, the defendant’s attorney, argued that his client was involuntarily intoxicated by Adderall and was suffering side effects of the drug when he allegedly shot Robert Marcyan in the head. He also fired at Richard Marcyan, but did not hit him. Lyons maintained that because of the Adderall, Hamilton was legally insane when the shooting took place.

Kati Rezmierski, Chief Assistant Prosecutor, said that the victim was driving an older model BMW and wearing $30,000 in jewelry, and that Hamilton was “just another drug addict motivated by money.”

Murder is the most serious crime an individual can commit; however, there are occasions on which an innocent person is accused of a criminal offense he or she did not commit. Even when someone is guilty of a crime, there are often options which can result in reduced criminal penalties. The key to obtaining successful results in any criminal circumstance is hiring an experienced and highly skilled Michigan criminal defense attorney. Depending on the offense you are accused of committing, your lawyer may be able to prevent charges being filed, or determine whether it may be beneficial to plead to the charges in regards to criminal penalties.