On December 16, 45-year-old Teresa Lynn Crang of Flint was sentenced on drug charges and allegedly stealing money from her elderly mother in order to support her crack cocaine habit. 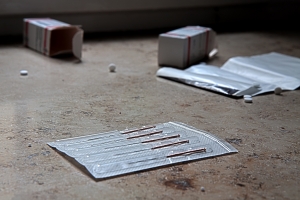 Crang was arrested in May of 2012 and pleaded no contest to possession of less than 25 grams of a controlled substance, according to a news article at Mlive.com. Genesee Circuit Judge Archie Hayman ordered the defendant to serve two years probation and nine months in jail on the charge.

The defendant also pleaded no contest in connection with stealing money from her mother, money which the 64-year-old woman received after Crang’s father passed away. News articles indicate that Crang’s mother, a resident of Clio, received a $180,000 life insurance payout. Genesee County Sheriff Robert Pickell alleged that Crang convinced her mother to open a checking/savings account at a local credit union using $50,000 of the insurance payout. Without her mother’s knowledge, Crang requested an ATM card which she intercepted and used to withdraw more than $40,000 over a two-month time period in the fall of 2012.

Crang was charged with obtaining a financial transaction device without consent. She pleaded no contest to these charges as well.

Since the May 2012 arrest, Crang has been arrested twice while on bond, once in July after being stopped and found with marijuana, and once in September after being pulled over on suspicion of drunk driving. In addition to jail time, probation, and restitution, Crang was ordered to undergo drug treatment and psychological counseling.

Possession of less than 25 grams of cocaine is a felony offense with stiff criminal penalties which include fines of up to $25,000 and up to four years in jail. Had Crang not pleaded no contest and went forward to trial, her sentence may have been harsher had she been convicted. Michigan prosecutes drug offenders vigorously in an effort to cut down not only the amount of drug activity that goes on in the state, but the associated violence as well.

Certain drug-related offenses may leave those accused facing life in prison. Whether you are arrested for possessing marijuana, manufacturing methamphetamine, or distributing/selling cocaine, heroin, or any illegal narcotic substance, the criminal penalties will change your life. In order to secure the best possible outcome, consult with an experienced and dedicated Michigan drug crime defense attorney immediately.