On Monday August 26, a 23-year-old Ithaca man was arrested after authorities found what they believed to be components for manufacturing methamphetamine in a white Dodge Caravan. After his arrest, the Midland County Sheriff’s Office was preparing to recommend to prosecutors that he be charged with possession and meth manufacturing, according to a news article at Mlive.com. Pending his arraignment, the suspect is currently lodged at the Midland County Jail. 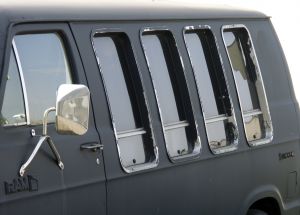 On the 26th, Sgt. Michael Sutherlund of the sheriff’s department was patrolling when he came across the white van, which appeared to have been sitting in the area of Magrudder and Kent near Jasper for quite some time, according to sheriff’s department reports. Sutherlund was patrolling the around between 10:30 and 11:00 p.m. following recent larceny complaints when he saw the van sitting at an intersection.

When the driver of the white Dodge Caravan saw the patrol car, he turned into a private driveway and then got out of the van, according to police. Upon being questioned, the suspect told police he was searching for a friend who lived in the area. Police then checked with residents, and determined the person who the suspect had named did not reside there.

Police apparently became suspicious at this point and requested permission to search the van; the suspect complied. Upon searching the vehicle, police found filters, lithium batteries, plastic bottles, drain cleaners, and a white crystal-type substance which was determined to be methamphetamine after field testing. The suspect was transported to the Midland County Jail after being arrested. Michigan State Police and the Bay Area Narcotics Enforcement Team assisted the sheriff’s department.

Manufacturing methamphetamine or any Schedule 1 or 2 drug in the state is considered a very serious criminal offense. As all Michigan drug possession lawyers know, the penalties for these types of crimes include steep fines and long-term jail sentences, among other things.

If you have been arrested for manufacturing meth, maintaining a grow house, or any serious drug offense, consult with an aggressive and skilled Michigan drug crime attorney at once. Taking this step is critical, even if you are under investigation and have not yet been arrested.