On Monday September 16, 58-year-old Clinton Edward Smith was arraigned in the death of his estranged wife, Delores Mae Smith. The defendant is charged with open murder after allegedly stabbing her to death. Smith was arrested in Saginaw on Friday, September 13 when police found him hiding beneath a trailer after the victim’s body was found dead in her Portage apartment. 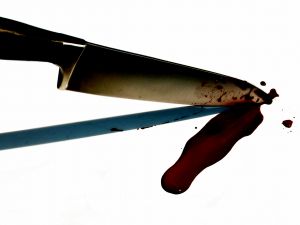 Portage police received a call after Smith showed up at his son’s house; according to a news article at Mlive.com, he was wearing clothes that were stained with blood. The victim’s children called police to check on their mother after becoming concerned about her welfare. This is when a Portage Public Safety detective said he went to her apartment on Meredith Street, and found Delores with what he called “a significant wound to the left side of her neck.” The detective went on to say that after asking why the children wanted a welfare check done, they said the defendant was in Saginaw, driving their mother’s car and wearing bloody clothes.

Delores was found with a knife in her left hand, although she is right-handed. Authorities did not believe the stab wound was self-inflicted. Clinton Smith’s children said that he was acting strangely, and would not answer questions about their mother.

Upon searching the victim’s apartment, detectives found blood smeared on the walls, droplets of blood, and bloody clothes under the kitchen table. The detective said blood was also in the bathroom where it looked as though whoever committed the crime had attempted to wash up. The defendant had a blood-stained washcloth with him, which the detective said appeared to be the same as washcloths found at Delores Smith’s apartment.

Clinton Smith is being held in the Kalamazoo County Jail without bond, and is scheduled for a preliminary exam on September 30.

In Michigan, open murder is first-degree murder. This is an extremely serious charge which could leave the defendant facing life in prison. Obtaining the legal support and guidance of a trusted criminal defense attorney is critical, as anyone who is charged with murder must have their legal rights protected. Although homicide is one of the most serious and violent crimes a person can be accused of, every individual is innocent until proven guilty. There are occasions on which police or prosecutors make mistakes. Investigative tactics must be reviewed by a capable lawyer who can determine if your rights were violated.

Having a skilled and aggressive Michigan criminal defense lawyer on your side can make all the difference in the outcome, regardless of how hopeless the situation may seem.